Professor Yoshinori Nishino (Laboratory of Coherent X-ray Optics, Research Institute for Electronic Science, Hokkaido University), Professor Kazuhiro Maeshima (National Institute of Genetics) and collaborators revealed by using strong X-rays from a large-scale synchrotron radiation facility SPring-8 that the DNA that constitutes the "blueprint of life" is irregularly bundled and stored "in a rather random fashion". The fine threads of DNA, with a diameter of 2 nanometers, are wrapped around spools made from proteins called histones to form nucleosome fibers that are about 11 nm in diameter. In 1976, the UK’s Klug (recipient of the Nobel Prize for Chemistry in 1982) and collaborators proposed that regular spiral folding of these nucleosome fibers could form a chromatin fiber of about 30-nm in diameter. A widely accepted and established theory about chromosome structure suggests that this chromatin fiber is spirally wrapped to form a fiber that is 100-nm in diameter, and subsequently 200- to 250-nm, then 500- to 750-nm fibers, and finally a regular and spiral hierarchy structure. In practice, the most famous textbook on molecular biology, "Molecular Biology of The Cell," and high-school biology textbooks describe this established theory.

The research group has obtained results that disprove this established theory. They have found that the peak that appears in X-ray scattering data, which has been long regarded as a strong evidence for the chromatin fiber with a diameter of about 30 nm, is caused not by chromosomes themselves but by many ribosomes adhering to the surface of chromosomes. In addition, an ultra-small angle X-ray scattering instruments that was developed by Nishino et al., has allowed us to measure X-ray scattering up to the entire length scale of a 1-micrometer chromosome, although such large length-scale had been difficult to access. As a result, they found that there was no scattering peaks that would correspond to fibers of about 100-nm or about 200- to 250-nm predicted by this established theory. A series of these results points to the absence of the chromatin fiber and of higher-order structures in which the chromatin fiber is regularly bundled, despite the model of this theory. 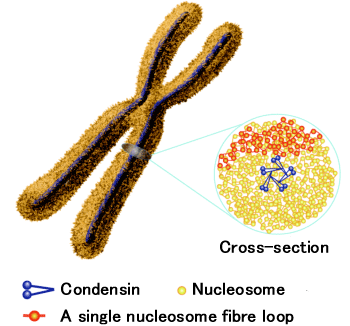 Figure 1: A nucleosome fiber (red) is irregularly stored in a chromosome. In the chromosome, proteins called condensins (blue) and topoisomerases II exist in the axial region. 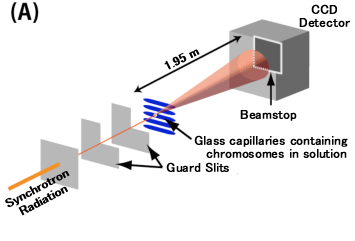 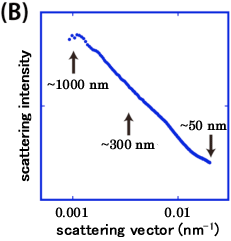 Figure 2: (A) Ultra-small-angle X-ray scattering measurement was performed for chromosomes at BL29XU of SPring-8. The chromosome was examined over a length-scale up to 1 micrometer, which is equivalent to the diameter of the chromosome. As a result, a scattering peak was not observed that would indicate the presence of an about 100-nm or about 200- to 250-nm fibers predicted by the established theory (B).
Go Back